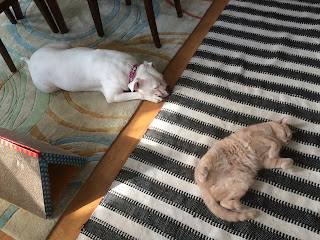 Last week I was pleased to have been invited to speak to Chinese and Japanese academics about the concept of shared governance from its origins, through its golden age to the challenges that have emerged in recent years (for more see, here, here, here, here, here, and here). The focus of the study was the organization, operation and challenges of the University Faculty Senate at Pennsylvania State University.

The group of administrators and graduate students was organized by Hideto Fukudome, Associate Professor, Graduate School of Education, The University of Tokyo. More about the group here.


The PowerPoint Slide of the presentation, "Institutionalization of the Faculty Role in Shared Governance: The Faculty Senate at Penn State University," may be accessed HERE:

A transcript of the presentation follows: 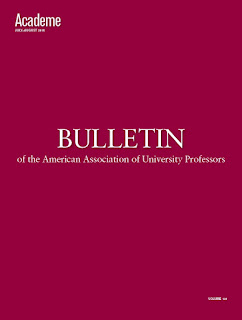 The Association of American University Professors (AAUP) has recently announced publication of four (4) of its Academic Freedom and Tenure Investigative Reports:

One of the cases, that of Professor Salaita is quite well know.  (See here and here).

Another (Southern Maine) deserves substantially more attention than it has gotten--the increasing use of mass layoffs through program closures as an effective means of short circuiting the traditional protections designed into the "financial exigency" standards that had served as a common basis of action for several generations.  What had started after Hurricane Katrina in Louisiana Universities (see, e.g., here) now looks to have evolved into a mechanism for relatively easy faculty terminations.  Effectively, the movement seems to be to a standard in which the financial deficiencies of a single program now appear enough to trigger university financial exigency sufficient to support the termination of faculty in the targeted program. For universities, this is a way around the protections of tenure at a time when universities are moving to a very different model for delivering education "product", one in which faculty protected by tenure are increasingly painted as "in the way."

The other two follow--in a world in which faculty are increasingly viewed, like copy paper, as consumables in the manufacture of education products, tenure is increasingly viewed as an impediment to efficient production.  Its only value, increasingly limited, is as a means of revenue raising (by grant funded faculty) and in the competition within prestige markets that, it is believed, increases the quality of students harvested for income production and consumption of education. For universities this presents a problem, and the two cases suggest current experimentation: is there a way of retaining the revenue raising and prestige enhancing benefits of tenure without actually providing the security that makes such objectives attainable?