From the AAUP: Resources Against Targeted Online Harassment 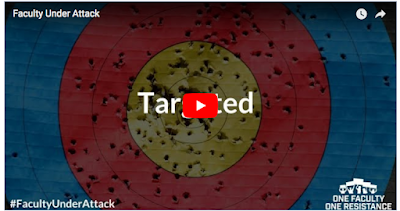 The American Association of University Professors (AAUP) has recently considered the wave of activity touching on the social media and online interactions of faculty with other stakeholders both within the public sphere and in the university itself.

Over the last year, targeted online harassment of faculty has emerged as a significant threat to academic freedom. Fueled by websites such as Professor Watchlist, Campus Reform, and College Fix, campaigns of threats and harassment are directed against faculty members for what they are reported to have said in the classroom or posted on social media. (here)

AAUP has developed materials that speak to this targeting of faculty by those who may disagree with faculty views,writings or other work.   To that end it has developed an online Case Letters from the AAUP:A look at four of the recent harassment cases where the AAUP has intervened to protect academic freedom.


This post includes links to AAUP resources for faculty who believe they may be the target of harassment set out in a press release from the AAUP, which follows.  Also below the AAUP's one page "What You Can Do About Online Targeted Harassment." The AAUP is also interested especially in assaults against faculty on the cntemporary political left.  Its latest edition of Academe includes several articles that provide useful insights whatever the political source of attack.

Shared Governance and the Managerial Character of Faculty in the Evolving University: Dueling Amicus Briefs From University of Southern California v. National Labor Relations Board, No. 17-1149 (D.C. Cir. 2017) 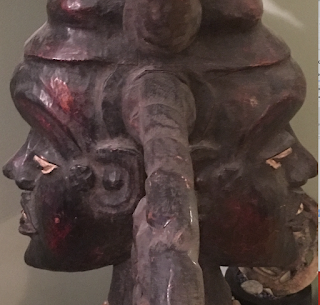 University administrations have, quite correctly, sought to have it both ways.  On the one hand they continue to peddle the narrative of the idealized university of autonomous professionalized faculty deeply involved in the governance of the academic mission of the institution.  On the other hand they have increasingly moved to administer a very different reality where behind the slowly fading institutional veils of faculty involvement in governance has been created a factory environment in which the university serves increasingly as a means of preparing its tuition payers for insertion into increasingly well designated portions of the global wage labor markets.  For some elite universities the factory produces (and protects the status) of the highest level jobs at the pinnacles of the governmental and non governmental institutions of power. (For my discussion of this trend see, "The University in the Age of the Learning Factory: Dueling narratives in the culture war around higher education," here, and here)

To this end the character of utility of the faculty has changed dramatically.  And that transformation has especially evident for institutions that are been designated to serve the "lower" levels of the wage labor markets.  It has changed both the character of teaching, the connection between knowledge production and knowledge dissemination (in ways that will have long term impacts on both--the character of which has yet to be fully understood),  and has changed the way the university values faculty production. Tenured faculty are expensive--both in the allocation of their time,  and in the way that tend to be less flexible objects of production (in the sense that they cannot be easily moved from one form of production (e.g., German studies) to another (e.g. engineering) to suit value maximizing (to the university) change sin the demand for labor inputs (e.g. students). Contract faculty are eminently flexible in the sense that they might be kept forever if suitable but can also be shed when necessary.  Their time can be adjusted to suit the teaching research mix needs of the institution and while they can be easily disciplined if they annoy their managers (with the ultimate power to choose to not renew a contract).

These issues are not confined to the writings of an academic posting to a blog but has increasingly appeared at the center of litigation designed to acquire recognition in law for the vast changes in the realities of the relationship between emerging classes of faculty and university administrators. At issue is an effort for courts to reconsider the premise narrative of the university that lay at the foundation of the germinal cases (of a generation ago) which based a conclusion that faculty were managerial employees on an increasingly abandoned premise that the old shared governance system deeply and effectively embedded them within university governance.

A recent case worth noting is University of Southern California v. National Labor Relations Board, No. 17-1149 (D.C. Cir. 2017).  The case represents a challenge by the university to a decision of the National Labor Relations Board that determined that USC's contract faculty were not managerial employees.  This post includes the amicus brief of the American Association of University Professors in that case as well as the AAUP Press Release relating to the case which takes one side of the narrative argument (and points to the legal effects of the changes to the university since 1980).  It also includes the amicus brief of the American Council on Education, an industry group representing university administrations and their boards.

The most interesting parts of both arguments, produced by some of the finest advocates on both sides of the issue, is the way that the arguments highlight the extraordinary transformation of the both the notion of "shared governance" in the university and the context in which it can be exercised.  Both sides exclaims that the other "does not understand shared governance" (AAUP Brief pp. 11-28; ACE Brief pp. 18-27)--the reality is that both understand quite well--but the conclusions to be drawn are as highly contested as is the size of the conceptual divide between traditional and contemporary ways of understanding the university itself. Both sides seek to leverage that reality--the AAUP by suggesting that change has altered legal reality and the ACE by suggesting that the changes do not alter the underlying relationships among faculty and administration.

Yet the case, and the arguments, would have been incomprehensible when the original legal rule was pronounced in 1980.  And the reason has little to do with the understanding of shared governance (and its "mis-understanding;" though that is what all sides hope to keep centered in the judicial proceedings. Rather, and something both sides might downplay, is not that shared governance has changed but that the character of faculty have changed--and that change ought to produce legal consequences (but it also produces substantial challenges to faculty solidarity). And indeed, it might be possible to understand the nature of changes to shared governance not merely as a function of changes in university administration, but also as a function of changes in the composition of faculty.  Faculty who are not protected by tenure and whose contract may be terminated by administrators are in a fundamentally different position with respect to governance than tenured faculty.  The Industry association seeks to make the best case for the continued application of the rule which can apply equally to tenure and non tenured faculty (the difference in the character of the employment relationship would not change the underlying normative principle supporting it); the AAUP argues that the underlying normative principle, as well as context, has now changed so dramatically that the original premise framework just does not work for this new class of faculty. Whatever happens, this will not be the last case in which university stakeholders will seek to bend the law to their own views of the reality of the university in this age of great changes. 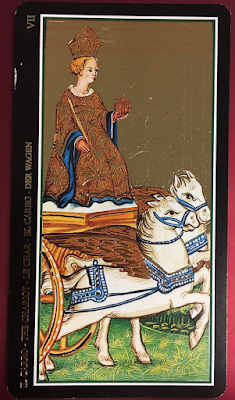 
It has become something of a ritual for  people to engage in prediction--what I call the oracular function of influence or drivers--in virtually all sectors of production, including the higher education industry.   Prediction serves a variety of functions--it draws attention to specific issues; it helps order these issues into hierarchies of importance; it helps to frame the narrative, that is the way in which such issues are understood and discussed; it provides a window on the issues that those in control of the affected institutions are worried about--it reveals institutional fears;  and of course it enhances position of those in the business of prediction within the webs of influence in the sectors in which they are embedded (or through which they are trying to make a living).

Julie A. Peterson and Lisa M. Rudgers (co-founders of Peterson Rudgers Group, a consulting firm focused on higher education strategy, leadership and brand) recently considered a set of important trends in the higher education business for 2018--"Saddle Up: 7 Trends Coming in 2018," Inside Higher Education (2 Jan. 2018). This complemented their oracular efforts of 2017 (trends coming for 2017).  Their predictions are worth considering carefully. They hit the mark in several important ways: (1) identification of key issues that university officials will likely confront; (2) the way in which such official will likely approach the issues and their "resolution"; and (3) the narrative around the issues from out of which an understanding of how to think about these issues are developed.  Identification, response, narrative control are the three key elements that will define  the administrative "to do" list and control the orthodox way of understanding, thinking about and speaking to those issues.

This post briefly considers the seven issue identified by Peterson and Rudgers and then offers additional trends that will have a high impact on the education business in 2018. 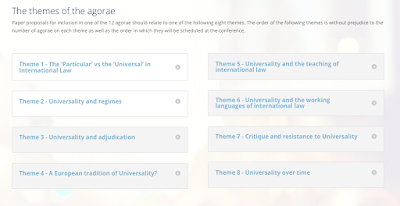 I am happy to pass along the call for papers of the 14th Annual Conference of the European Society of International Law. It will be held in Manchester, United Kingdom, under the auspices of the Manchester International Law Centre (MILC). The conference begins on Thursday 13 September and ends on Saturday 15 September 2018.

The  Conference Concept Note (Theme: International Law and Universality) follows along with information about the ESIL Young Scholar Prize and submission info and links.