The Price of Complicity: From the AAUP--The State of the Profession Now Better Exposed

The American Association of University Professors (AAUP) has  distributed its 2020 Annual Report on the Economic Status of the Profession recaps the key findings from the AAUP’s 2019–20 Faculty Compensation Survey.  The Report expands on a general pessimism that has now become virtually impossible to ignore.  But more than that, it suggests the product of complicity.


For decades the American professorate (and their fellow travelers abroad) have rationalized the fundamental changes occurring in the academy. Among them, (1) the deprofessionalization of the faculty; (2) the rise of a professional administrator class that was first an aid and then the overlord of matters once left to the professional discretion of those involved in the production and dissemination of knowledge; (3) the change in the character of the institution arising from the general movement in American institutional culture towards risk avoidance and compliance mentalities which produced the sort of surveillance cultures necessarily overseen by an autonomous administrator class; (4) the commodification of education and its closer alignment with the needs of wage labor markets (and those with disproportionate influence over those markets); (5) the transformation of students into present values of income streams, and the provision of services into profit centers; (6) the rise of technology that transformed the way one valued the effectiveness (and objectives) of education; (7) the rise of educational servant classes (so-called contingent faculty) in a professorate already riddled with corrupting internal status hierarchies; (8) the reduction of knowledge production to quantifiable status markers which then drive a culture of producing knowledge to its markers (which can then be used to discipline production and manage academic freedom without the need to actually read and assess work); and (9) the move to online education the character of which is driven by administrative rather than faculty objectives and standards.

In the construction of each of these faculty has been complicit (in its ancient sense--from the Latin complicāre, “to fold together”).  Faculty become administrators, as assimilate into the logic of a culture that increasingly distinguishes itself from the faculty as both superior and managerial--that is faculty administrators take professionalization with them into administration and necessarily reduce its significance for those left behind.  But faculty has freely transferred administrative responsibility to others to make their lives easier, and to create more time for research and teaching (time made necessary in part because of the way that they have permitted administrators to develop accountability measures). Faculty have participated in the construction of compliance and accountability cultures without thinking about the way these operate as political elements of administration. Faculty have facilitated the commodification of education, both in terms of the production of knowledge and its dissemination; they have delegated not just administrative but also course and research work to "hired help" that then contributes to cultures of "high" and "low" learning, as well as the way one creates systems of valuing research (per unit of effort). Faculty has been led into leveraging operations that make them (per student) less necessary in part because of a willingness to accept the metrics of measuring student learning by those who now are more professionally capable then they were. And, indeed, the embrace of specific metrics by faculty have been instrumental in the transformation of its own character and the framework through which it is disciplined. More important, perhaps, has been the migration of the control and authentication of those metrics from faculty to administrators and to groups of autonomous "experts" (experts in the theories of metrics, in the simulacra of production and impact) from which these measures derive power now detached from those who produced the work judged. And so on.

The results are becoming clearer in the wake of the pandemic.  The nature of the university has changed, as has its purpose.  The relationship between its stakeholders (students, faculty, administrators, and "staff") has changed in response to reflect both new power relationships and new expectations.  More fundamentally, the way that faculty are needed (in the production and dissemination of knowledge) to students or generally for the greater glory of the institutions who pay or fund them is also changing.  Increasingly faculty are useful for the production of facts that can be consumed by others.  They are even more useful for the construction and maintenance of simulated realities to be applied as directed by and for the benefit of others. Faculty, de-centered from the process of learning, now facilitate the transmission of knowledge that is as a general rule produced authoritatively by smaller and smaller of people. This is all reflected in the (re) organization of the university as an institution, and faculty, as a factor in the production of its welfare in relation to its key stakeholders--students, alumni, the state and labor markets.  This is a problem that is neither inherently American, nor only manifested within liberal democratic systems.
The Press Release follows (AAUP Report Identifies Key Factors to Watch following COVID-19 Pandemic), with links to the Annual Report . 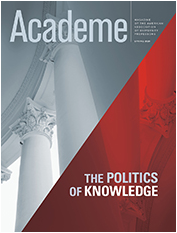 The spring 2020 issue of Academe, inspired by the AAUP’s statement In Defense of Knowledge and Higher Education, examines the complexities—conceptual, critical, structural, and political—of the production of knowledge. Joan W. Scott, professor emerita in the School of Social Science at the Institute for Advanced Study, served as the guest editor of this special issue of the magazine.
Follow the links in the table of contents below or read the entire issue at https://www.aaup.org/issue/spring-2020.
FEATURES
Rebellion, Authority, and Knowledge
Disciplined thought and expertise are essential to the advancement of knowledge.By Robert Post
The Big Secret in the Academy Is That Most Research Is Secret
The dangerous rift between open and classified research.By Kate Brown
A Dissenting View from the Humanities on the AAUP’s Statement on Knowledge
In defense of critical inquiry.
By Judith Butler
Dialogue across Divides
The humanities can provide understanding across disciplines.By Joy Connolly
Academic Freedom as Democratization
Faculty must be involved in all aspects of university decision-making.By Christopher Newfield
Data Snapshot: Survey Data on Attitudes toward Faculty Freedom of Expression(online only)
How might political views influence attitudes toward academic freedom?
By Hans-Joerg Tiede
BOOK REVIEWS
Snowflakes and Syllabi
Brian Hutler reviews What Snow­flakes Get Right by Ulrich Baer.
Understanding Students Who Are Parents
Jillian M. Duquaine-Watson reviews Back in School by A. Fiona Pearson.
Liberal Education Needs Integration, Not Unbundling
Rebecca Pope-Ruark reviews College Made Whole by Chris W. Gallagher.
Should Only the Strong Survive?
Lawrence Stelmach and Allison A. Buskirk-Cohen review Strategic Mergers in Higher Education by Ricardo Azziz, Guilbert C. Hentschke, Lloyd A. Jacobs, and Bonita C. Jacobs.
Rebalancing Power in the Gig Academy
Roger G. Baldwin reviews The Gig Academy by Adrianna Kezar, Tom DePaola, and Daniel T. Scott.
CHAPTER PROFILE
Rutgers University AAUP-AFT
COLUMNS
From the Editor: The Politics of Knowledge
From the President: Eight Years of Organizing for Change
Legal Watch: Two Cases to Watch
NOTA BENE
Responding to the COVID-19 Pandemic
2019–20 Faculty Compensation Survey Data
Graduate Employees Strike at UCSC


The spring 2020 issue of Academe, inspired by the AAUP’s statement In Defense of Knowledge and Higher Education, examines the complexities—conceptual, critical, structural, and political—of the production of knowledge. Joan W. Scott, professor emerita in the School of Social Science at the Institute for Advanced Study, served as the guest editor of this special issue of the magazine.
Follow the links in the table of contents below or read the entire issue at https://www.aaup.org/issue/spring-2020.