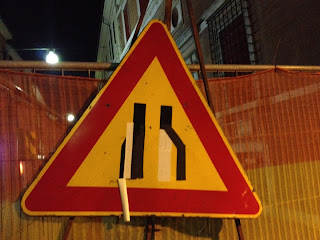 X's mom died of heart disease when she was 16, her father is disabled, and she is his custodian. X cares for her sister's kids when she needs to make extra money to put food on the table. Z's mother died in a car accident when he was 12, with no life insurance, his sister is disabled and he is her care giver in their small apartment. This is all they can afford; to make ends meet and because of the medical equipment required for care, he sleeps on the couch......Today is a bad day; no transportation.  X is lucky.  She managed to borrow a car, no insurance though. X is picking up Z, her study buddy Z so they can both get to class. Without their mutual support, they would be unable to survive the stress of their personal and academic lives. Both X and Z look to their faculty for support but expect nothing from those who run the institution. If our administration had half of the chutzpah of these students...... I am lost here....

These are the circumstances of a significant enough portion of the students who seek the fulfillment of the hope that is at the very center of the promise of post secondary education in contemporary American colleges. How does an academic institution practice being the sort of student centered place that the typical institution trumpets  from the lofty speeches of its administrators to the pages of its social media products? The answer, increasingly is that they may not.

This post considers the problem of being student centered for the contemporary American university and the growing chasm that separates administrative formalism of the concept (through rules and aspirational sentiments) as against its functional realization.

On the U.S. Department of Education Final Program Review Determination Re Penn State's Clery Act Compliance Before 2011 and Its Assessment of a $2.9 Million Fine 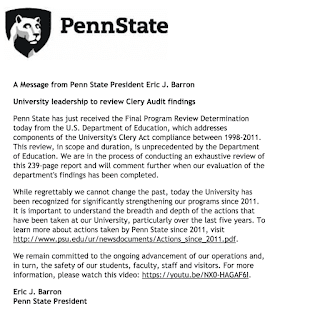 "This letter is to inform you that the U.S. Department of Education (Department) intends to fine the Pennsylvania State University (Penn State; the University) a total of $2,397,500 based on the violations of statutory and regulatory requirements outlined below." So begins the official notification, with justification and explanation, of the largest fine assessed to date by the federal government against a university for violation of that cluster of statute and regulation usually shorthanded as the Clery Act.   It is possible that the University will contest this fine, though it is hard to speculate on what grounds. That alone might be cause enough to think about the implications of this fine and its underlying causes, as American universities consider these ramifications for their own operations.


To some extent, the letter, and the action was not unexpected by the wider community in the United States. It was a long time coming--the investigation began almost five years before.  What is especially interesting is both the odd logic of the letter and what it suggests, not about Penn State's failures before 2011, but those of the government itself. Equally interesting, perhaps more so, is the determination of the university itself, in its heroic efforts to move forward, to seek to obliterate the past, one might think, as if it never happened. One can only end an analysis of action and reaction with a sense that the lessons learned may well have been the wrong ones--both for the United States, and for the university it has sought to make an object lesson to advance its own agendas.

The U.S. Government's letter may be accessed HERE. 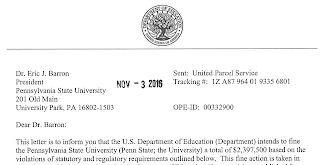 My thoughts follow along with the statement of high University officials follows and for background, the story as reported by the Associated Press.