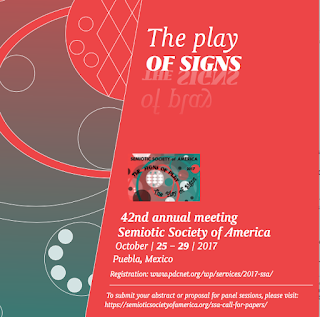 I am happy to pass along a call for papers to what in the past has been a very exciting conference.  This year the 42nd Annual Meeting of the Semiotic Society of America will be held 25-29 October in Puebla, Mexico. I hope those interested int he subject will consider submitting a proposal.  The 2017 Conference program committee was chaired by a Penn State colleague, Deborah Eicher-Catt. The call for papers (in English and Spanish) follows. 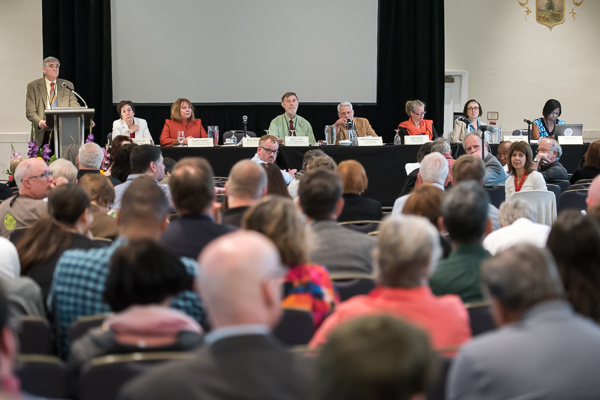 The AAUP has recently taken action on censure.

Delegates to the 103rd annual meeting of the American Association of University Professors voted today to remove the University of Illinois at Urbana–Champaign and Phillips Community College of the University of Arkansas from the AAUP’s list of administrations censured for violating principles and standards of academic freedom. The vote recognized that both institutions had successfully amended problematic policies and addressed the conditions that had brought about the original censure. Delegates also voted to impose censure on Spalding University (Kentucky) and the Community College of Aurora (Colorado), based on investigations conducted this year that revealed serious departures from principles and standards of academic freedom at those institutions. (Here)

Scholars and Educators for Open Travel to Cuba: A Letter to President Donald Trump 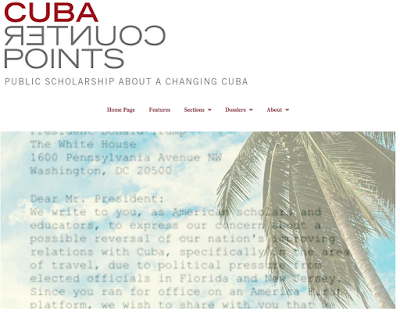 We are on the eve of an important and necessary event-  The Conference on Prosperity and Security promises an important engagement with Central America.

Regional presidents, U.S. Cabinet members, the vice president and top Mexican officials will meet in Miami this week to take on some of the most vexing problems plaguing El Salvador, Guatemala and Honduras, the battered countries of Central America’s Northern Triangle.

Drug trafficking, gang violence and other criminality have taken their toll, resulting in 50,000 murders over the past three years in the Northern Triangle, and that insecurity — combined with widespread corruption and lack of economic opportunities and development — has contributed to a massive outflow of the countries’ residents. Most of them have ended up in the United States.

The Conference on Prosperity and Security, set for Thursday and Friday, is being convened by both the United States and Mexico, a country crisscrossed by drug trafficking, organized crime and people smuggling routes. (Fixing Central America is the focus of high-level Miami summit).


Read more here: http://www.miamiherald.com/news/nation-world/world/americas/article155658824.html#storylink=cpy
Even conservatives and exponents of the new "America First" initiative view this effort as important (See, e.g., here). Yet on the eve of an important Central American Summit, it appears that the 45th President intends to make public an announcement that has been rumored to be focused on undoing the opening up policies of the 44th President.

If President Donald Trump outlines his new Cuba policy in Miami on Friday, it could upstage a Central American conference that is bringing regional presidents and Mexican and U.S. Cabinet members to town this week.


Among steps Trump is reportedly considering are limiting travel by Americans to the island and restricting American companies’ ability to do business with entities controlled by the Cuban military. Sen. Marco Rubio and Miami Rep. Mario Diaz-Balart, the only two local Republican members of Congress who backed Trump, have been pushing the president to roll back the opening by then-President Barack Obama. (Trump’s announcement on Cuba could clash with Central American summit).

Read more here: http://www.miamiherald.com/news/nation-world/world/americas/cuba/article155767424.html#storylink=cpy
To the extent that is is the result of measured considerations of state and ultimately for the benefit of the people of the United States undertaken without undo harm to the people of Cuba, one can understand (if not agree) with the specific measures undertaken.  It would be a great pity, and a derogation of the obligation that our officials owe this Republic,  if instead the policy change would be based on a a need to "repay" political favors or to satisfy the sad vision of a part of the Cuban immigrant community that is, in its own way as stuck on December 31, 1958, as the Cuban regime may be stuck on January 1, 1959 (e.g., here). Indeed, members of the President's party also share a concern about reversing course on Cuba without good reason (e.g., here). And it is not clear how the shift in Cuba policy will impact our relations with other Latin American states--nor the extent to which this was considered.  One worries because, at least with respect to multilateral relations, the President has adopted a piecemeal approach that might increase the likelihood of failing to anticipate consequences of policies adopted in one state on others int he region--much less on internal constituencies (e.g., here and here).

There are substantial implications should the 45th President indulge the impulse to undo policy (if only to distance himself from his predecessor--a no-principles basis for policy, to be sure, but one not uncommon even for beloved former Presidents of this Republic). One of the most important and immediate may be on the production of knowledge and academic exchange.  It is with that in mind that a group of scholars have written the President urging him to reconsider any possible consideration of the sport of policy roll back that might undo the opening up to Cuba in effect since 2015. The letter, Scholars and Educators for Open Travel to Cuba: A Letter to President Donald Trump, follows.  The letter has been republished by the Chronicle of Higher Education.