Scandal, Culture Change, and Discipline at USC: The Emerging Roles of Bureaucracies, Faculty, and Litigation in Institutional Risk-Compliance Regimes 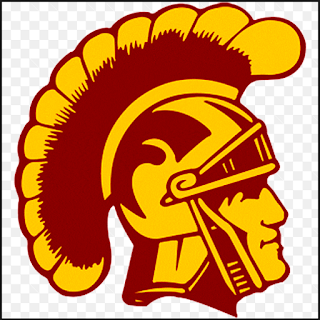 Universities, like other large institutions, have been plagued by scandal related to sexual misconduct.  Among the latest institutions facing significant disruption on the basis of an alleged wrongful failure of administrators to prevent or remedy (through for example appropriate working systems of monitoring and mitigation) such sexual misconduct  is the University of Southern California.  USC is now in the midst of the consequences of "a growing scandal over abuse of students by a campus gynecologist, George Tyndall, and other incidents in which the university is perceived to have failed to act on misconduct by powerful officials." (Scott Jaschik, USC President Will Step Down, Inside Higher Education 29 May 2018).

This post considers the way that such scandals have now acquired their own patterns of response.  It suggests the way that for large institutions, mere reliance on institutional reporting and monitoring systems, even those combined with robust complaint avenues, are rarely sufficient to produce a robust and effective response (See,On the Management of Scandal in the Modern University; Some Lessons and Insights for Times of Crisis; for earlier reflections in other institutions see, e.g., here, here, here, here, here).  Accountability might be far more effective with a strong and well developed system of both internal and external stakeholder action, one that makes it more difficult for senior administrators to seek shelter within their self reflexive managerial cocoons.  For internal action, the protections of tenure academic freedom are essential. For external sanctions, a robust social media and news establishment is essential for communicating complaints to the larger markets in which the university operates and on which it is dependent (made up of alumni, donors, regulators and students).
Read more »
Posted by Larry Catá Backer at Wednesday, May 30, 2018 No comments:

The Language of Bureaucracy: Rostam J. Neuwirth, "Law in the Time of Oxymora A Synaesthesia of Language, Logic and Law" 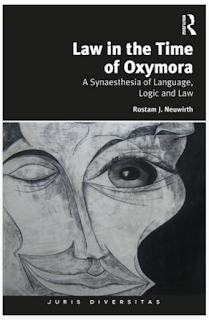 I am happy to pass along news of the publication of Rostam J. Neuwirth, Law in the Time of Oxymora: A Synaesthesia of Language, Logic and Law (Routledge 2018). A rich work, it addresses the fundamental challenges to legal reasoning and legal logic and also open a broad debate on the consequences that these linguistic changes are likely to trigger. The relation of the project of reasoning to the transformation of the meaning and structures of communication within enterprises, and especially universities, may be quite useful.

This from the publication materials (the abstract follows).

In the time of “alternative facts”, “Yanny and Laurel” or other oxymoronic phenomena, the “law and society” debate faces a plethora of serious challenges that are often framed in individual “law and … pairs”, like those of “law and technology”, “law and language” or “law and the senses” to mention but three. However, such dichotomous thinking underlying law at large is increasingly facing pressure from so-called “essentially oxymoronic concepts” and may no longer be able to deal with the pace of change and complexity in the real world.

(Alex Morey, "Teresa Buchanan Uncensored: How an Innovative Educator Created Top Teachers and Got Fired for It, Fire," Jan. 22, 2016 )

“I got fired for what they called ‘sexual harassment,’” Buchanan said of her 2015 termination, but there were no allegations she “harassed” anyone, sexually or otherwise. Rather, LSU took action because of some of the language Buchanan used in course instruction with her adult students. “Everything that they accused me of had to do with things that I had said as part of my teaching methods,” said Buchanan, noting that no student ever accused her of sexually harassing them. Rather, her approach was designed to enable new teachers cope with teaching in the real world, and doing so at some times involved the use of harsh language.  (Alex Morey, "Teresa Buchanan Uncensored: How an Innovative Educator Created Top Teachers and Got Fired for It, Fire," Jan. 22, 2016 )

The modern university has tended to become a safe space--but not in the way that term is commonly understood.  The safety of the university space is ensured through emerging programs of compliance driven in turn by the socialization of a riskless environment.  And cultures of risk negating behaviors include not merely forbidding hiking clubs to hike (here) or researchers to explore (here) but it seems it now also includes constraining teaching and teaching innovation through the broadened use of social control mechanisms, including, in most interesting ways, the otherwise important and necessary  regulatory architecture for the suppression of sex harassment on campus.   Increasingly, this policing of risk, in the form of compliance, has begun to affect the shape and scope of tenure and academic freedom (here).

It is at the intersection of these trends that one finds Teresa Buchanan, a faculty member at LSU who was terminated after the university determined that her teaching methods constituted harassment ("LSU said in a statement released Thursday through spokesman Ernie Ballard that the university is confident the action it took against Buchanan was appropriate. “We take our responsibility to protect students from abusive behavior very seriously, and we will vigorously defend our students’ rights to a harassment-free educational environment,” the statement added." here). And yet it was those very methods that appeared to have made her teaching a success judged by the standards of the university. An interesting conundrum appears as a consequence, one situated at the intersection of ancient values and now apparently of zero sum dignity considerations.

This month [June 2015], Louisiana State University fired—outright fired—a tenured professor of education, Teresa Buchanan, ostensibly for creating a “hostile work environment” via sexual harassment. Her infraction? Allowing profanities to pass from her tenured lips, and unleashing a single ill-advised bon mot about sexual intercourse. . . . For all this, after an 11-hour hearing, a committee of Buchanan’s peers concluded that she be officially censured (which is not the same as “censored,” except in this case it is), and never use “potentially offensive language” in the classroom again. But the LSU administration found that already-Draconian punishment insufficient. Buchanan actually got fired. (Rebecca Shuman, "Academia’s P.C. Brigade Has Started Policing the F-Word. That’s Taking It Too Effing Far," Slate June 2015)

The LSU Faculty Senate condemned the action (here for the resolution of the LSU Senate seeking the censure of senior administrators and the reversal of the decision). The AAUP censured LSU (here). Buchanan sued (complaint here) and lost in the lower courts (see here). To the delight of the LSU Administration the case was dismissed in January 2018 (report here). The case is currently on appeal before the 5th U.S. Circuit Court of Appeals.

This post includes links to the brief filed by AAUP in support of Professor Buchanan's appeal. The issues touch on a core area of transformation of the university and its relationship both to the production of knowledge and toward its producers within a regulatory and institutional environment that tends to prefer performance to the average and a homogenized product that can be sold without substantial risk or pain.  One can't blame the university--they believe they are in the business of producing individuals qualified for insertion into wage labor markets. Yet, the university might still be condemned for the choices that led them to those beliefs and practices.  Teaching professionals also believe they are engaged in producing individuals better suited to live lives that maximize their value to society and to the student. To that end a bit of experimentation and risk taking may be necessary.  Where one draws the lines is now one of the more important issue framing the way in whcih one understands tenure and academic freedom in the contemporary university.

In the Spirit of Folly --A Primer for University Faculty Assessment 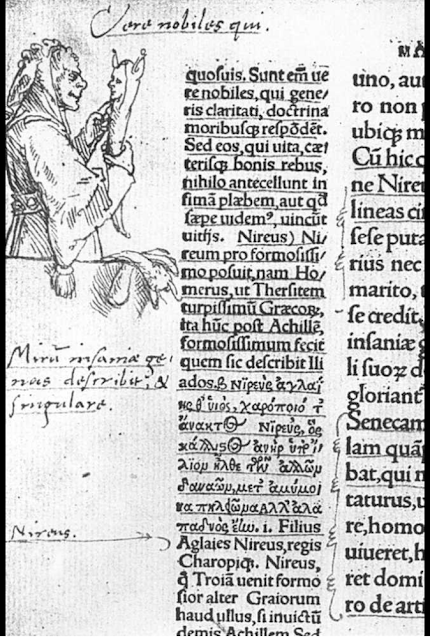 Academic faculty review-assessment season is once again upon us. This is the time of year when all of the pious recitations about shared governance and the like are bent to the economic (and sometimes strategic) agendas of the university and the unit head. It is a reminder that while governance is shared, power is not. And, of course, where substantial subjective administrative discretion is veiled within what appears to be standards and guidelines, academic reviews serve as a great point in the annual cycle to discipline threats, control conformity, and signal the outer bounds of acceptable behaviors. None of this is new--it is true that pieties around the process have metastasized as the scope of discretion has grown, and that the data driven assessment has made the subjective process appear more "neutral" by shifting the locus of discretion from data to the parameters around which data is gathered and assessed--but the hunger for strengthening the cloak of respectability does appear to have intensified over the last decade.


Academic review now suggests the spirit of folly in its architectural sense: "a building constructed primarily for decoration, but suggesting through its appearance some other purpose, or of such extravagant appearance that it transcends the range of garden ornaments usually associated with the class of buildings to which it belongs." (HERE).  And indeed, the architecture and rituals of review nicely evidence the folly of institutional architecture as it has been emerging recently.  It is in that spirit of folly, then, that I offer a manual for folly in academic review gathered over the years from a wide variety of sources and representing variations of folly from around the world.  These are drawn entirely from stories heard over the years and are fictional in character--any similarities to actual persons and events are wholly unintentional.

Here, then, In Praise of Folly ("An oration, of feigned matter, spoken by Folly in her own person. . . . Prepare therefore to be entertained with a panegyrick, yet not upon Hercules, Solon, or any other grandee, but on myself, that is, upon Folly."). Let the spirit of folly reign!
Read more »
Posted by Larry Catá Backer at Friday, May 04, 2018 1 comment: 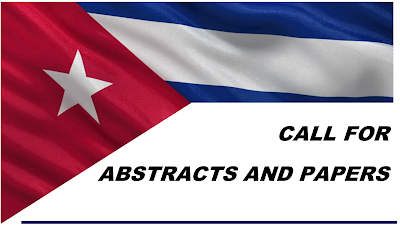 
The call for papers with links may be accessed here (Castellano/English).