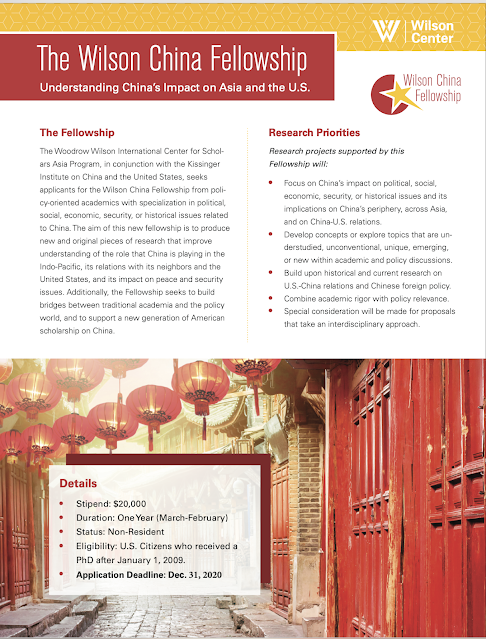 This month, the Wilson-China Fellowship is recruiting its second class of scholars, and I'm writing again to ask if you could send the below information to any colleagues you think would have interest.

The only requirements are that they be a U.S. citizen and that they received a PhD after January 1, 2009. They do not need to be China-focused scholars necessarily, but only have an interest in conducting research on aspects of China's rise and its impact on the world and/or the United States. The first class included research on energy issues, information and technology, as well as traditional geopolitical and security issues.

As a brief description, the aim of this fellowship is to produce new and original pieces of research that improve understanding of the role that China is playing in the Indo-Pacific, its relations with its neighbors and the United States, and its impact on peace and security issues. Additionally, the Fellowship seeks to build bridges between traditional academia and the policy world, and to support a new generation of American scholarship on China. A brochure is follows.

The Journal is published online annually, and is supported by funding from the AAUP Foundation. We release a call for papers each fall.

JAF has put out a "Call for Papers"  for its next volume, scheduled for publication in fall 2021. The Journal of Academic Freedom will consider any original article on the topic of academic freedom,

See the latest call for papers. Which also follows below