From the American Association of University Professors: Report of Committee A on Academic Freedom and Tenure, 2017–18 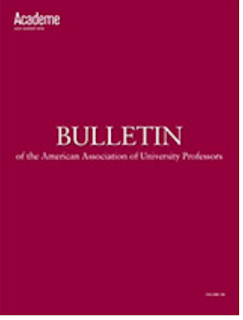 The American Association of University Professors has just released its 2018 Bulletin.  Its website explained that "This year's Bulletin features an academic freedom and tenure investigative report, revised Recommended Institutional Regulations on Academic Freedom and Tenure, reports on the assault on science and campus-free-speech legislation, and annual reports and other business documents.

Most interesting was the Report of Committee A on Academic Freedom and Tenure, 2017–18,  which follows below.  The Report was particularly interesting for the way in which the Committee continues to wrestle with the efforts to boycott the State of Israel (and deal with Israeli state retaliation) as well as discussion of the release of the Report: National Security, the Assault on Science, and Academic Freedom. This is particularly interesting for the development of an American academic set of principles dealing with foreign exchanges and espionage, as well as the difficulties of engaging with the political effects of academic work.