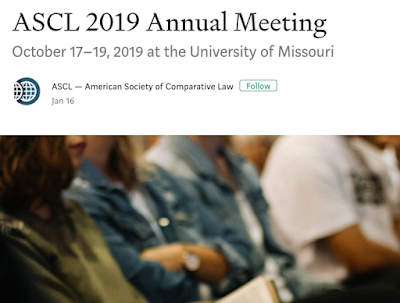 Passing along what is likely to be a very interesting and useful event:

The American Society of Comparative Law (ASCL) has just issued a call for proposals for (1) concurrent panels and (2) a works in progress conference to be held in association with the ASCL 2019 Annual Meeting, which will be held at the University of Missouri School of Law between Thursday, October 17, and Saturday, October 19, 2019. The event is open to ASCL and non-ASCL members.

The theme of the Annual Meeting is “Comparative Law and International Dispute Resolution Processes” and will feature presentations on how comparative law affects various types of cross-border conflict, including but not limited to litigation, arbitration and mediation. Concurrent panels and works in progress papers need not fall within this general theme, although of course they may. Multilingual panel proposals will be considered as part of ASCL's mission to foster plurilingualism.

Information on the event, including the call for panel proposals and works in progress submissions, is available at
http://law.missouri.edu/faculty/symposia/comparative-law-international-dispute-resolution-processes/ Proposals will be accepted until May 20, 2019.

Posted by Larry Catá Backer at Monday, January 28, 2019 No comments: 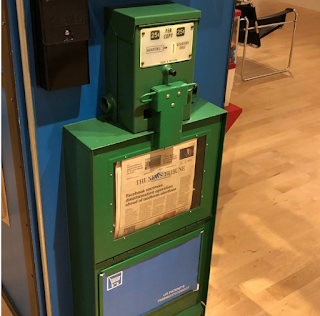 The European Society of International Law has recently distributed a list of call for papers for upcoming conferences, some of which may be of interest:

Posted by Larry Catá Backer at Wednesday, January 23, 2019 No comments: 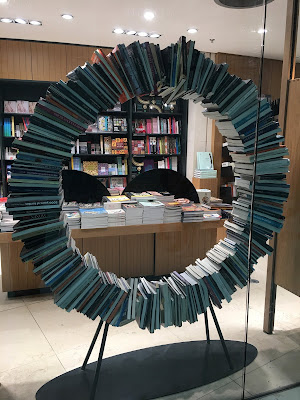 Academics worldwide remain vigilant against the erosion of academic freedom by administrators or the state.  This erosion threat has worldwide dimensions. Yet academics have been all too willing to sell their academic freedom for financial support.  And all to often, that quid pro quo--grants for the production of work that satisfies the needs or desires of grantors--is institutionalized in universities that then make the acquisition of grants a significant element in professional assessment.

Academics, for the most part are reconciled to this relationship between money and the control of the direction of academic production.  That reconciliation is due in part from need, but also because academics are critically embedded in the institutions that finance the production of knowledge.  They serve as the peer reviewers or relate positions of many of these; and the university itself rewards academics who are deeply embedded within the knowledge-finance complex. Academics (and their institutional masters) appear to have qualms only when there appear to be "conflicts of interest"--the definitions of which tend to reflect ongoing battles for ownership of knowledge or when outsiders question the legitimacy of such production for hire.

But while academics remain focused on formal or rule based threats, and remain vigilant about quality issues in the financing of knowledge production, the growing mania for productivity measures now may well pose a greater threat.  That threat is not just to academic freedom, but also to the quality generally of the production especially of basic knowledge (rather than boutique purchased knowledge for specific consumers). Quantitative measures increasingly provide a means for controlling the form and context of knowledge production, as well as the formats through which it is produced.  Here one sees the rise not just of assembly line factory ideologies transformed for the academic factory, but more importantly, of a production-publisher complex that not only shapes knowledge but which tends to transfer the rights to that knowledge from producers to "distributors." Academics, then, move closer to the bottom--lowest value added, part of knowledge production chains.

Accountability has given rise to a mania for the production of proxy measures through which the administrative structures of a faculty department might judge quality and quantity of academic production.  There is nothing inherently odd either about the focus on accountability, or on the use of proxy measures per se. However, in the form in which they have been developing over the last several decades, the result is to produce an assessment structure that effectively manages, if not controls, both the form and content of academic production to satisfy the measures of assessment.  In effect, the measures of quality have themselves now become the object of quality. One does not produce knowledge to advance learning  but to meet the criteria for assessment.  In the process, assessment measures can be used to substantially shape and manage the cultures of academic production in ways that may ultimately harm the production of knowledge.

This is not merely the whining of the American professorate. Academics elsewhere have begun to understand that data analytics, when these drive assessment without appropriate qualitative constraints beyond the measures, can be used to shape, in sometimes dramatic ways, the relationship between academics and knowledge production. Recent interest among Spanish academics suggest the nature of the problem. A article published in El País, El suicidio programado del gran ensayo, makes the point for the Spanish and Italian academy, portions of which follows below (Spanish only).

Call for Papers: ESIL 2019 ANNUAL CONFERENCE--Sovereignty: A concept in flux? 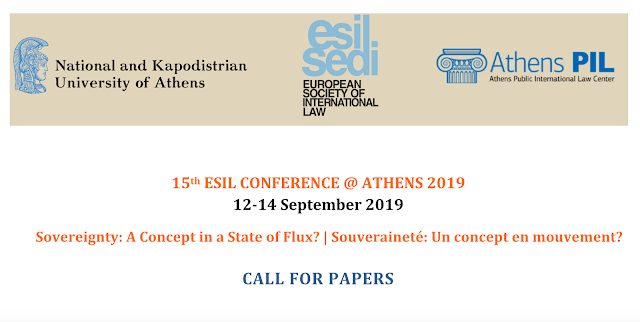