Efficacy Studies and the Education Sector

Intervention studies can be placed on a continuum, with a progression from efficacy trials to effectiveness trials. Efficacy can be defined as the performance of an intervention under ideal and controlled circumstances, whereas effectiveness refers to its performance under ‘real-world’ conditions.1 However, the distinction between the two types of trial is a continuum rather than a dichotomy, as it is likely impossible to perform a pure efficacy study or pure effectiveness study. (source, see also here)

This method  appears to be on the horizon of those who influence the cultures of the education industry (here, here, here, and here).

Goldie Blumenstyk has recently reported for the Chronicle of Higher Education about the release of papers from a first of its kind symposium on efficacy research hosted by the University of Virginia:

1. Colleges spend upward of $5 billion a year on educational-technology products, but often they lack data that could better inform the decisions they make on what to buy. Over the past year, several dozen academics, business executives, and policy wonks researched why “efficacy research” isn’t more of a factor in these decisions. Some of those findings were presented at a symposium in May, and now the full reports are available.

2. Efficacy research isn’t just missing in ed tech. It’s also all-too-absent when it comes to the burgeoning world of “alternative” educational credentials, at least according to a new report by Ithaka S+R, a nonprofit consulting organization, for the American Academy of Arts & Sciences. Among other recommendations to policy makers, funders, and the higher-education community, the report recommends broadening quality-assurance processes so they can include educational programs not offered through traditional colleges as well as an investment in “a more comprehensive data system that captures longitudinal, student-record data on students’ experiences across the full array of postsecondary pathways, as well as information about providers and their programs and credentials.” In a world where some advocates are still pushing for more complete data on students in traditional higher-education settings, that could be a big ask. Or perhaps it will become one more argument in their favor. —


The links to the reports produced from the symposium and the press release follow. 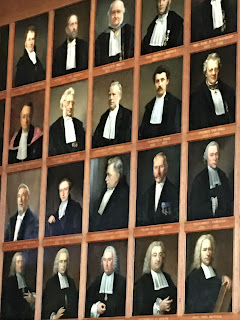 In 2016, Georgetown Law, The Journal of Legal Education and the Georgetown Gender Justice Project hosted a conference on the subject of Sexual Assault and Academic Freedom on College Campuses. The Press Release Conference Note explained the scope of the Conference:

Universities occupy a hallowed position in American culture. But numerous studies showing high rates of sexual assault on college campuses, as well as several well-publicized incidents, have spurred not only a wave of concern about students' safety but also new and more rigorous policies for addressing these assaults in universities and colleges across the country. While the importance of protecting students from violence is unquestioned, these new policies call for consideration of issues such as the appropriate role of administrative decision-making, the role of governmental regulations, the need for academic freedom, and the rule of law generally. How can we best ensure an educational environment free from sexual violence but, at the same time, provide for academic freedom and fair processes? How might we best maintain academic freedom without making it a defensive shield against enforcing equal opportunity requirements within academic life? These and related questions will inform the symposium.

The Journal of Legal Education has now published articles from that conference in its Summer 2017 issue.  The articles, with links, follow.  The articles merit serious study and discussion:

From the AAUP: academic freedom and tenure investigative reports, a report on the independence of student media, updated policy statements on collective bargaining and collegiality

The Bulletin of the American Association of University Professors is published annually as the July–August issue of Academe. This year's Bulletin features academic freedom and tenure investigative reports, a report on the independence of student media, updated policy statements on collective bargaining and collegiality, and annual reports and other business documents.
Links follow.
Read more »
Posted by Larry Catá Backer at Tuesday, August 08, 2017 No comments:

Thoughts on Maranto and Woessner: "Why Conservative Fears of Campus Indoctrination Are Overblown"

There has been some attention paid to the challenges of being a conservative (however one defines that term) in the modern American academy (e.g., here and here). That attention has drawn the intersst of important political forces that have manged, yet again, to draw universities into the middle of contemporary political struggles, and likely for all the wrong reasons. Much has been written of, about or around the issue. Some of it is quite good, others mostly polemics meant to advance one agenda or another by frightening stakeholders with select references to data or other bits of "information" to suit. For a taste, see also Why Colleges’ Liberal Lean Is a Problem; Academe Is Overrun by Liberals. So What?; and The Academy’s Assault on Intellectual Diversity; Liberal Academia in Donald Trump’s World; and A Confession of Liberal Intolerance.  There is much more, of course, all easy to find via internet search engines. And they appear to have had some effect (e.g., here).

Robert Maranto and Matthew Woessner have just published an interesting contribution to the debate, "Why Conservative Fears of Campus Indoctrination Are Overblown," Chronicle of Higher Education (July 31, 2017). Robert Maranto is a political scientist and professor in the department of education reform at the University of Arkansas. My colleague Matthew Woessner is associate professor of political science at Penn State Harrisburg and co-author of The Still Divided Academy: How Competing Visions of Power, Politics, and Diversity Complicate the Mission of Higher Education (Rowman & Littlefield, 2011). Professor Woessner is currently serving as Chair of the Penn State University Faculty Senate, in which I serve this year as Parliamentarian.


The essay is well worth reading.  This post provides some brief thoughts on Maranto and Woessner's excellent essay.