In Abood v. Detroit Board of Education, 431 U.S. 209 (1977), the United States Supreme Court extended the right to a union shop to public service employees. They reasoned effectively that public employees ought not to be denied a right accorded to private sector employees. Certain elements of the political sector have been quite cross ever since. On June 27, the Supreme Court issued its decision in Janus v. AFSCME Council 31 (see the court's opinion).

One can view the issue in at least two broad ways; the choice of which to privilege depending in part on one's politics, and political agendas.  In one perspective, the case reduces itself to the protection of formal political rights among individuals, and extends that protection to the context of economic relations between labor and capital and among labor collectives and dissenting individuals. In another perspective, the case reduces itself to the reduction of the collective power of labor (compared certainly to the power of collectivity in capital) within firms, and shifts the distribution of economic power within labor and between labor and capital in the operation of firms. That distribution of power, especially in the context of shifts of power allocation between aggregations of capital and aggregations of labor have long marked this Republic. "Indeed, under common law, “collective bargaining was unlawful,” Teamsters v. Terry, 494 U. S. 558, 565–566 (1990)" Janus, n. 7 majority opinion)).


Of course, the mediation of both views would have been important.  But this saga might better be understood in legal cultural terms as a generation old act of revenge by one reconstituted side of the American economic-cultural-political spectrum against another.  It was a long road from Abood to Janus. And it was a war littered with interest, advantage, and intransigence on all sides. But this is politics ("Today, the Court succeeds in its 6-year campaign to reverse Abood." Janus, Kagan, dissenting) p. 2). That is is an excellent marker of the benefits and challenges of judicial politics well into an age in which the U.S. has adjusted itself to the reconstitution of the judiciary as perhaps its most political branch, remains to be seen. For lawyers, beyond the constitutional points, the discussion of stare decisis would be worth some thought. These are the rules that sometimes liberalize or constrain the political opportunities offered through litigation, even they they might, in the process, undermine (or transform) the once conventional judicial character of the institution (assuming that was itself never a myth, though if so a useful one for national stability).

Indeed, in line with the great political cases, well funded by national (and increasingly international) actors using the courts as a more efficient medium for political reconstitution (as opposed to the cumbersome and expensive legislature, the complex bureaucracy, or the executive branch that is usually too disorganized to be effective consistently), this case can be understood as another in a long line of instances in which powerful actors focus their competition in the courts. In this case, unremarkably, Janus was represented in court by the Illinois Policy Institute’s litigation partner, the Liberty Justice Center, as well as the National Right to Work Legal Defense Foundation.

The decision has significant effects, though their character and direction remains to be seen, for the university. This might be interesting, for example, with respect to application to publicly assisted universities. And the fight over the rights of labor and capital to aggregatinbg power remains an unfinished story.

This post includes the statement of the AAUP
Read more »
Posted by Larry Catá Backer at Saturday, June 30, 2018 No comments: 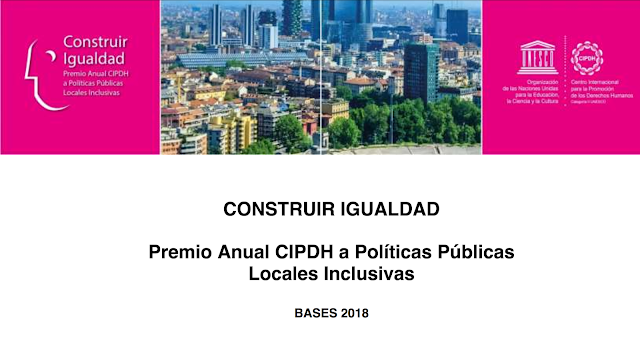 The International Center for the Promotion of Human Rights (CIPDH in its Spanish acronym) is the first Category II Center of UNESCO in the world dedicated to the promotion of human rights. It was established in the Argentine Republic in 2009 and it works as a decentralized body within the Executive Branch of this country. Pursuant to its mission, which is based on the principles of equality and non-discrimination from a gender equality, diversity and interculturality perspective, it gives recognition to public policies of equality and non- discrimination in the Latin American and Caribbean (LAC) region through the creation of the Construir Igualdad (Building Equality) Award. Annual CIPDH Award for Inclusive Local Public Policies CONDITIONS - 2018)