The Battle Over Graduate Student Labor 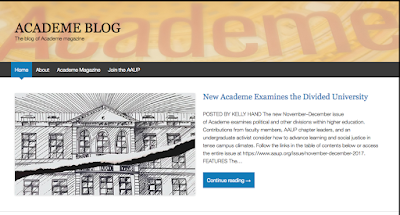 I am pleased to cross post a short blog essay I wrote for Academe Blog, the blog of Academe Magazine.


The post, entitled The Battle Over Graduate Student Labor, was originally posted HERE, and can also be found below.

The full article to which it related may be found HERE.

The Battle Over Graduate Student Labor
/ 1 week ago

Once virtually everyone in the nation could look at the university and see in it the embodiment of a noble idea. Universities were the place where young adults were given an education (civic, social, and intellectual) to prepare them for the assumption of their roles in society. To that end, students received an “education” (broadly understood) which would be acquired both by being educated and by contributing to the education of others—that is, through classes and also through experience. By contributing to the education of others or in the production of knowledge (as research assistants, teaching assistants and the like) and by focusing on the education of the entire person in social groups (through sport), the entire life of the university had deep pedagogical value in civic, social and intellectual education that served the individual, the economy, the state, and society.

But, change has come to the university just as it has come to all other aspects of national life. Sports are big business for universities—not just as direct revenue generators—but also as a means of cultivating their critical alumni stakeholders for political and economic support. The excitement of virtually any sport, from football to wrestling and lacrosse, has helped universities cultivate revenue sources beyond tuition, merchandising, and ticket sales. And, for public universities, it permits revenue autonomy from and dependence on the state. Sport also provides substantial marketing for that other principal business of the university—the intake and output of students. For the provision of education (and research) might be developed to better generate revenue. Yet the change was not in the use of education and sport to generate revenue, but in the inversion of the relationship between revenue and education. Where before revenue was generated to sustain education, now education might be understood as the means to sustain revenue. That inversion would produce profound changes in the way in which people might think about the business of education (and sport); the sports division would produce entertainment and the education division would produce degree-bearing students valuable for the wage labor markets into which they are targeted.

Critical to the success of both is labor. And that is where things get complicated. Once upon a time none of this would have been thought odd. That was the implicit deal in education—students were given a chance to excel in sport (and became better all-around citizens and perhaps opening a path to a sports career); students were given a chance to try to their hand at teaching and to aid in research so that they might acquire the experience that might be viewed as useful or necessary to start a career (especially in education) or to better learn the subject of study. But today, students are less willing to buy into this story of the “deal” in education. The inversion of the business of education also contributes to the inversion in the way students and student athletes see their own role in the university.

What is going on? Some students have begun to see themselves less as customers and more as labor. Livers v. NCAA, Berger v. NCAA, and Dawson v. NCAA point to a growing rift between university officials who continue to defend the old ideal (while transforming its implementation) and students who see a new sort of relationship emerging (and an effective betrayal of the old ideal by the university). The same applies to recent efforts to unionize graduate students across some of the most prominent universities in the United States, including Columbia University, the University of Chicago, and the University of Pittsburgh. These efforts are evidence that students understand the way their role has changed. They are coming to believe that their status as students is marginal to their real function in the university—to provide critical components to the production of sport spectacle or the key element to the lower cost education of other students. But this growing perspective is fiercely rejected by universities, which adhere to the old ideal even as they resist the consequences of the change they have brought on themselves. To understand the modern university, one needs to understand this emerging battle between the university and its student-labor. Read more about this in my essay, “The Conflicting Narratives of the Ideal University in the Age of the Learning Factory and the Battle Over Graduate Student Labor,” which appears in the November/December issue of Academe (member login is required to read the full article).

Larry Catá Backer is W. Richard and Mary Eshelman Faculty Scholar and Professor of Law and International Affairs at Pennsylvania State University in University Park. Backer teaches and writes in the areas of globalization, institutional governance, and transnational law and finance, and he previously served as chair of Penn State’s faculty senate.