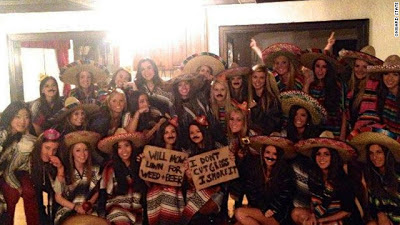 
Like many people in this country, I was chagrined to see, yet again, what is altogether too common--an "innocently" offensive playing out of what is an unconscious part of the larger socio-cultural landscape of this Republic. A close look at the picture suggests the innocence--the effort to invoke items of clothing associated with the people of the Mexican Republic.  It also, however, slaps the viewer with its quite conscious offensive meanness, one rooted in racism and ethnocentrism (even if mindlessly so)--the reference to the willingness of people, whose common denominator appears to be these items of clothing, to exchange thankless menial labor (in which they have traditionally been exploited in the U.S.) for marijuana. The double offense is clear--violators of immigration and drugs laws, a lawless group fit only for humor and expulsion.

This innocent double offense is also quite perverse.  It is well known that demand in the United States drives the drug trade with respect to which Mexico sadly serves as a gateway if only because of its geographical connection to the United States. Worse, it suggests an understanding of economic relationships with immigrants that is grounded on the assumption that base exploitation is both expected and acceptable. It damns a people and a culture with the wrongs--social, moral and legal--of those doing the damning.

The picture struck home to me quite personally.  That sort of humor was quite common when I came to this country as a young immigrant from another humorously exploitable nation--Cuba.  I well remember the mindlessness with which people of my parents generation would generate "humor", humor that almost invariably crossed from the good natured to the deliberately mean and mean spirited.  I watched my peers learn to mimic their parents and to absorb their bad behavior and even more perverse attitudes masked by the "innocence" of humor.  But my family and I knew precisely what was going on--and so did these "humorous folks".  The young adults in this picture are the heirs to a tradition that continues to sting those of us who came here only a few generations after their own ancestors. We understand the point and "get" the humor.  We feel the insult nicely buffered by a smile and a laugh.  We continue to feel the way this humor is meant to reinforce and remind some of us of our "real" place in the social and economic (and perhaps even the moral) order of this Republic.  We know the "place" reserved for us very well.  We are less willing to pay the price of earlier generations who hoped that laughing along with this sort of innocent thing is a "price" that we are expected to pay for getting along and moving up.  I am not a probationary member of this country and neither are many of the people who were the object of this humor.

So, even decades later, when I am well protected form this sort of thing, "this sort of thing" still hurts, and it still threatens.  I appreciate the sensitive efforts of our administration to both condemn and protect these young adults. Their "Open Letter to the Penn State Community" is reproduced below.  It is both heartfelt and sensitive to the legal context in which a large institution like Penn State operates. Yet I believe that it is worth emphasizing that though these young adults are the bearers of constitutional rights in which we all believe and which we all dedicate our professional and personal efforts to protect--they are also burdened with a host of social responsibilities that they have violated consciously and deliberately and with little consequence other than the need to make an apology.  This is not to suggest that punishment is in order--I suspect that punishment would merely reinforce the cycles of antagonism that produces, in this most benign form, the sort of meanness that produced the event and the photo. But it does suggest that the social responsibilities of these young adults and students ought to lead them to something more than a "sorry."  Some sort of public expression of a "lesson learned" and an understanding of the problem might be in order, the specifics of which are not for me to say.

As Chair of the Penn State University Faculty Senate I join with President Erickson and his administration colleagues in the "Open Letter."  I am grateful for their sensitivity and for the content of that letter. I expect that many of my colleagues on the Senate will also join in.  Yet, as someone who has been the target of this innocent "playfulness" and whose family, some of whom are more darkly complected and less able to navigate the English language,  have suffered more when innocent play becomes something more ominous, I hope that these young adults do more than find comfort in their constitutionally protected rights.

Here is the "Open Letter to the Penn State Community" signed by the top leadership at Penn State and release today.


To the Penn State Community:
In recent weeks and particularly in the past few days, it has become clear that some Penn State students celebrated Halloween in costumes and in a manner that offended others and was contrary to many of the most important values our University seeks to advance among its constituents and in the world. These disturbing behaviors involved expressive rights protected under various federal and state laws--rights which we strongly support, and which we honor by not vainly pursuing unlawful disciplinary action against the students involved. But we also cannot refrain from expressing our own feelings of deep disappointment and dismay.
How any constituent groups or individuals in the University could behave with such insensitivity or unawareness is a question we must both ask and answer. Our University is a place of learning and discovery, and there certainly are lessons to be relearned, or even discovered for the first time, from these incidents.
The simplest of those lessons is that costumes that include blackface, or that parody or imitate a person or groups of people, are always offensive to someone. They convey either a lack of awareness about the human condition and human sensitivities or, worse yet, disdain for the thoughts, feelings, histories and experiences of others. They suggest a failure to empathize or even a failure to think. They make all of us small.
Equally concerning is the psychological injury this does to individuals and damage such acts do to our sense of community. By emphasizing the superficial or stereotyped differences among us, these actions tend to stifle the sharing, collaboration, and common aspirations we require. Neither a university, nor a nation, nor civilization itself may long succeed if individuals or groups are encouraged to believe that they are neither welcomed nor appreciated.
We believe deeply in the power of reflection and learning. We believe that individuals can change by learning, and that a university community, such as ours, exists to change and improve both individuals and the world. It is that belief that calls upon all Penn Staters, wherever they may be, to reflect for a moment on the value of diversity in the University and the broader communities we inhabit. We must both celebrate our differences and embrace our common humanity. If we can do so, on our campuses and beyond, we will be better, our university will be better, and the world will be better.
How could we not?
Rodney A. Erickson, President
Paula R. Ammerman, Director, Office of the Board of Trustees
Susan M. Basso, Associate Vice President for Human Resources
Blannie E. Bowen, Vice Provost for Academic Affairs
Michael J. DiRaimo, Special Assistant to the President for Governmental Affairs
Henry C. Foley, Vice President for Research and Dean of the Graduate School
Yvonne M. Gaudelius, Assistant Vice President and Associate Dean for Undergraduate Education
David J. Gray, Senior Vice President for Finance and Business/Treasurer
Cynthia B. Hall, Acting Chief Marketing and Communications Officer; Associate Vice President for University Relations
Madlyn L. Hanes, Vice President for Commonwealth Campuses
W. Terrell Jones, Vice President for Educational Equity
David M. Joyner, Acting Director of Intercollegiate Athletics
Rodney P. Kirsch, Senior Vice President for Development and Alumni Relations
Robert N. Pangborn, Interim Executive Vice President and Provost
Harold L. Paz, Chief Executive Officer, Penn State Milton S. Hershey Medical Center; Senior Vice President for Health Affairs, Penn State University; and Dean, Penn State College of Medicine
Thomas G. Poole, Vice President for Administration
Damon Sims, Vice President for Student Affairs
Craig D. Weidemann, Vice President for Outreach