Report of the Special Committee on University Governance: Improving the Governance of Penn State, Revising the Structure of its Board of Trustees, and Furthering the Academic Mission of the University: Report and Recommendations

The Pennsylvania State University Faculty Senate Committee on University Governance was formed on March 15, 2012 with the following objectives:


--Examine the structure, functions, practices, and responsibilities of the Penn State Board of Trustees vis-à-vis interactions with constituent groups (students, alumni, staff, faculty, and administration);

--Compare and benchmark those attributes with peer institutions;

--I-dentify and recommend ways to improve and enhance interactions, including flow of information, and the interface of the University Faculty Senate, students, staff, and Administration with the Board of Trustees; 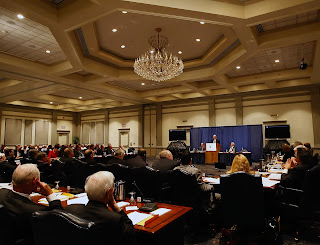 The  SCUB charge may be accessed here.  SCUB presented its report to the Senate Council on February 19, 2013.

This post presents the executive summary of that report.  The FULL REPORT SPECIAL COMMITTEE ON UNIVERSITY GOVERNANCE Improving the Governance of Penn State, Revising the Structure of its Board of Trustees, and Furthering the Academic Mission of the University: Report and Recommendations of the Special Committee on University Governance (February 2013) MAY BE ACCESSED HERE: SCUG_Final_Report.

SPECIAL COMMITTEE ON UNIVERSITY GOVERNANCE
Improving the Governance of Penn State, Revising the Structure of its Board of Trustees,
and Furthering the Academic Mission of the University:

Report and Recommendations of the Special Committee on University Governance

In the aftermath of the events of November 2011, the Chair of the University Faculty Senate appointed the Special Committee on University Governance to study the structure and practices of the Board of Trustees and to make recommendations for improving governance and communication at Penn State. To achieve its charge, the Special Committee consulted extensively with experts, reviewed the literature on best practices in higher education, benchmarked Penn State with other institutions, interviewed a wide variety of constituent groups, and conferred frequently with the Board leadership and other interested parties.

The Special Committee concludes that there is significant opportunity for the Board of Trustees, like most higher education governing boards nationally, to gain a better understanding of the academic mission and the unique structure of the university it governs. Most Board members bring a wealth of business and government experience but do not have a commensurate level of experience in higher education or understanding of how universities advance knowledge for the benefit of society. It is important to note that there is little dispute among higher education associations and experts that this is a national problem. The key question for the Committee is how it should be remedied at Penn State.

The Special Committee also concludes that this problem cannot be easily resolved with the current structure, means of representation, and composition of the Board. The Committee believes that the existing formula of representation by which constituent groups select a certain quota of Board members is anachronistic and the Board membership should come from a greater diversity of sectors and interests reflecting the modern mission of the University. At the same time, greater emphasis should be placed on selecting Board members based on their qualifications to perform critical governance functions rather than on what groups they might represent. Further, the Board should establish minimum qualifications for membership and a transparent and widely participatory nomination or vetting process to ensure the selection of qualified Trustees.

One of the best means of ensuring that the Board understands the mission, values, unique structures and operating systems of the complex academic institution that it governs is to select members who have academic expertise and professional experience in higher education. Those members, in the opinion of the Special Committee, should include at least two current Penn State faculty members. Including internal professional trustees on governing boards of other nonprofit institutions is widely considered a best practice and ensures that those boards are more fully informed and have the necessary expertise to make the best possible decisions on highly specialized matters. Faculty representatives on governing boards, while not widespread today, are becoming increasingly common at public universities.

The Special Committee respectfully disagrees with some recent proposals that would, for example, further restrict internal academic representation on the Board, bolster a top-down, corporate style governance structure, and increase political control of the University. Such proposals are based on a misunderstanding of the time-tested concept of a university and often are at odds with the norms of higher education. There is no question that Penn State must be accountable for the state appropriations that it receives and to the public it serves, but greater political control and legislation to enact these proposals would have long-term negative consequences for the academic well-being of Penn State. In other words, while change in the governance of Penn State is needed, no change is preferable to bad change.

While it is certainly true that numerous breakdowns in communication prior to, during, and after the events of November 2011 contributed to the problems at Penn State, they were not the root cause. Similarly, while effective communication is a necessary condition of effective University governance and to restoring confidence in the leadership of the Board, it cannot be a substitute for enlightened actions. As such, the Special Committee offers numerous recommendations for improving communication that, if adopted in tandem with appropriate organizational and policy changes, may assist Penn State in responding to the recent problems. Among those recommendations are to break down governance silos and integrate internal and external stakeholders in the governance of the University and to establish multiple and alternative flows of information among the Board, faculty, students, staff, administration, alumni, and other constituencies.

The Special Committee understands that public media campaigns might improve Penn State’s public image but feels that a greater emphasis should be placed on rebuilding a shared understanding within the University community. A core principle of effective communication is that the true character of an organization is expressed by its people and that the strongest opinions about an organization are shaped by the words and deeds of its people. The Penn State faculty and staff have countless external contacts every day; therefore, how they and the rest of the University community view the institution overall, how they interpret the sad events of the past several months, and whether they understand and support the strategy for recovery and accountability will largely drive their effectiveness as ambassadors of Penn State.

Finally, effective communication can only take place in an environment of trust. Therefore, a high priority should be to rebuild trust and a shared understanding within the University community. Achieving that will be difficult – if not impossible – without developing a culture of collaboration and civility among the Board and other stakeholders dedicated to the well-being of Penn State and its important work.

Email ThisBlogThis!Share to TwitterShare to FacebookShare to Pinterest
Labels: board of trustees, institutional role of senate, proceedings, shared governance, transparency