Drawing the Wrong Lessons From the Sandiusky Scandal for Institutional Reform and Athletics: John Feinstein on "The Lesson of Penn State" 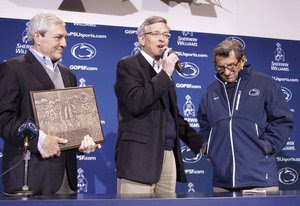 (From Mike Jensen, Colleges look at management of sports programs in wake of Freeh report
The Philadelphia Inquirer, July 15, 2012)

The essay is worth reading both for the point is makes and perhaps more importantly for it own analytical failures.  While the essay rejects the idea of the "leader" coach, it is still far too invested in the ideal of the "leader" president, and indeed, in the ideology  of singular leadership at a university, to suggest much but a substitution of one potential weak link in governance for another.

Feinstein's essay starts, naturally enough, with a focus on the repercussions of the Freeh Report on the legacy of former Penn State Head Football Coach Joe Paterno.  The assessment is not positive in the least. "The living shouldn't be immortalized. Joe Paterno was proof of that." (Feinstein, The Coaching Lesson of Penn State, supra).

But Feinstein, quite correctly, wants to make a larger point:

But this tragedy should do something else, too: remind everyone involved in college athletics that no coach, regardless of how many games he wins, how many players he graduates or how much money he raises for the university should be allowed to have the absolute power that Paterno wielded. Absolute power doesn't always corrupt absolutely, but it absolutely can corrupt. (Ibid.).

Feinstein does an excellent job of suggesting both the extent of the power of coaches in sports wildly popular with broadcast media and fans.  He suggests the market incentives that change the balance fo authority between coaches and athletic directors on the one hand, and university presidents on the other. "That shouldn't be true anywhere, but it is true almost everywhere, especially those places where a coach has won for many years." (Ibid.).

But his solution might be as troubling as his identification of the problem:

But no college coach should be placed on the pedestal that Paterno was put on at Penn State. That pedestal is what prevented then-President Graham Spanier from stepping up in 2001, when a graduate assistant coach told Paterno that he had seen Sandusky in a university shower sexually assaulting a 10-year-old boy. Instead of ruling that the only option was to notify authorities, Spanier and the university's athletic director allowed Paterno to dictate the school's course of action — which was no action at all.

This is an opportunity for presidents to do something other than preen. They should take steps to ensure that no coach can ever again have the absolute power Paterno wielded. They should stop giving coaches multimillion-dollar contracts. They should stop building statues and naming stadiums, arenas and basketball courts for them — especially while the coaches are still active. They should also stop asking them to raise funds. Tell them to coach their teams and try to see to it that their players graduate. Period. (Ibid.).

It is not clear that the solution to the problem of the "out-of-control" coach is a president equally outside of control mechanisms and beyond the structures of shared governance that permit all critical governance stakeholders at the university an appropriate role in the crafting of major decisions and the safeguarding of the best interests of the university.

Indeed, it is worth considering at this moment that this is precisely the time when universities should be talking about checks and balances--a conversation interrupted but not extinguished by the aberrational politics of the University of Virginia during the Spring of 2012. See this blog: Charting the Passing of an Age or Counter-Reformation?: The University of Virginia Saga Continues on of the Future of Board-Administration Relationships, June 22, 2012). It is not just university presidents who:

love to talk about the importance of academics and refer to football and basketball players as "student-athletes." They set themselves up as bastions of righteousness even as they let coaches run amok in the name of winning games and making money. (Feinstein, The Coaching Lesson of Penn State, supra).

And it is not just presidents with the duty to  "to do something other than preen." (Ibid.). Our own traditions of shared governance,  and, to some extent the Freeh Report, makes clear that Feinstein's basic insight is correct--unchecked authority, exercised without accountability, will sooner or later imperil an institution and all people of good faith working to advance its interests. But the answer to unchecked and unaccountable power is not to find a new home for it in another individual, whatever her title. And it is certainly not necessarily advisable to concentrate both power and authority in a single place on a hierarchically arranged system that operates counter to the foundational logic of the organization on which it is imposed.  The university would do well to return to its roots and on that basis move forward decisively: the answer to uncontested power is to fracture it; the solution to lapses in accountability is to devise systems focused on that purpose; the lesson of Penn State, then, should be of the value of checks and balances, of the need for robust governance, appropriately exercised, by administration, board of trustees, faculty, and athletics staff.  More importantly, the exercise of authority must move toward greater transparency--with an appropriate sensitivity to issues of individual privacy.  Institutional decision making and compliance,m however, ought to start with  a presumption of transparency rather than of secrecy and authority compartmentalization. These are hard lessons--hard to internalize, harder to operationalize, and harder still to make work over a long period of time.  But it is a challenge that may not be avoided.  It is to the more robust development of that institutional structure that the Freeh Report suggests that Penn State turn its attention.
Posted by Larry Catá Backer at Sunday, July 15, 2012