Penn State Prepared for the Release of the Freeh Group Report

In a press release notable for its subtle reminder of the connection made by some between the former employment roles one of the principals in the Freeh Group, the firm hired to investigate the events surrounding the indictment of Mr. Sandusky, and the legitimacy of the content of the report of that investigaiton, Penn State transmitted the following message to its internal and external stakeholders via its Press Release portal, Penn State Live:

Louis Freeh, the former FBI director and federal judge who has led an independent, external investigation into all aspects of the University's actions related to child abuse allegations against former assistant coach Jerry Sandusky, has just announced he will release the findings of his investigation at 9 a.m. Thursday, July 12, at http://www.TheFreehReportonPSU.com online.

We look forward to seeing the report on July 12 and reviewing Freeh's recommendations. The Board of Trustees will be holding a regular meeting this week at Penn State Worthington Scranton, and the University will provide a response on Thursday in Scranton at a time and location to be announced. (Results of Freeh investigation to be released July 12, Penn State Live, July 10, 2012).

This post considers briefly some of the ramifications of this report, and especially the potential role of the University Faculty Senate once the Freeh Report is made available. 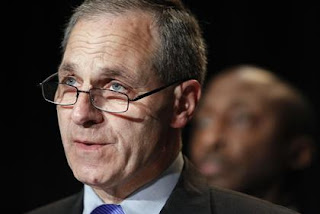 Thursday is bound to be a media circus--and a well orchestrated one.  The Freeh Group has determined to release the report on Thursday, July 12th at 9 a.m. via Internet, at 9 A.M. to be followed by a media presentaiton at 10 A.M. in Philadelphia at the Westin Philadelphia hotel.  The object, it seems, is to suggest or increase the perception that the Freeh Group is unconnected to Penn State or its Board of Trustees. Thereafter, the university governance apparatus--well, at least its administrative and board apparatus (the faculty institutional leadership voice will be and remains conspicuously absent)--will hold its own media event at the site of the Penn State Board of Trustees meeting in Scranton Pennsylvania, at a site that will likely be announced prominently in the next day or so. The University spokesperson, David La Torre, has been tasked with media relations.

From the perspective of the University Faculty Senate, the Freeh Report will also be of interest.  The Senate anticipates that the report will be divided into two large sections.  The first will be investigative and evidentiary in character, dealing with the history of the particular events that led to the indictment of Mr. Sandusky and the terminations of former Head Coach Paterno and former President Spanier. With respect to that portion of the Report the University Faculty Senate will play a limited role.  It will, however, pay special attention to the discussion of process and other protections afforded to people who may be implicated by the Freeh Report.  It is important to the Senate, especially with respect to the treatment of faculty and staff at Penn State, that the University, through its administration and Board, deal fairly with both and effect any actions adversely affecting faculty or staff in accordance with its own procedures.  We will be paying special attention to the way in which university and board of trustees procedures were followed and will be followed, not just with respect to the former President and Head Coach (a subject of current Senate investigation with a report that might be produced for Senate consideration in the next several months) but to others as well.

It is with respect to any portion of the report that includes recommendations touching on university governance that the Senate will likely pay special attention.  One of the benefits of Mr. Freeh's independence of any connection with those tasked with university governance was his ability to present himself as neutral.  But there is a cost as well, especially when it touches on governance.  The members of the Freeh Group involved in the preparation of the report have no special obligation to the university, they share no current connection with its traditions of governance nor obligation to act in the best interests of the university when it comes to matters of governance.  The Freeh Group is and remains outsiders, as they should be, with no duty to the university other than to do their best in good faith to produce the report in accordance with the terms of their contract with the university and to be paid for their services.  It is with that in mind that the Senate will review any recommendations.  There is no reason to believe that these recommendations  some of which have already been distributed and implemented, will be other than useful, and will help the university better its operations and governance in accord with our shared values. It is our hope, though, that the Board of trustees will not adopt those recommendations blindly, without the exercise of discretion or the application of their fiduciary obligations to the university, or without the sort of consultations that are part of our traditions of shared governance at Penn State

The University Faculty Senate will stand ready to play its role in working through the recommendations that may emerge from the work of the Freeh Group. For that purpose the University Faculty Senate is prepared to meet now to begin the process of reviewing and engaging with the Freeh Report in ways that are appropriate and that touch on the institutional role of the faculty in the long tradition of shared governance here at Penn State.  We hope to make that process open and transparent.  We welcome any comments, suggestions and thoughts from our colleagues among alumni, students and faculty, as well as from our friends elsewhere.
Posted by Larry Catá Backer at Tuesday, July 10, 2012