In a message to the University community in the wake of the release of the Freeh Group Report, President Erickson reminded us:  "This is not the end of the process, nor will it be the end of a number of investigations or inquiries into the University. We will continue to cooperate fully with all agencies and will communicate these interactions with you, our community. We plan to analyze the many recommendations made in the Freeh Report and begin implementing a number of them as quickly as possible. " (Rodney Erickson, A message from President Rodney Erickson to the University community, July 16, 2012).

Our President also had an important message for rank and file faculty:

I would ask that your response to this public scrutiny be to continue your excellent work in the classroom, the lab, the office or wherever you are making your mark in this world and on behalf of Penn State. It is through your diligence and dedication that the world will again view Penn State as a force for advancement and good. (Ibid.). 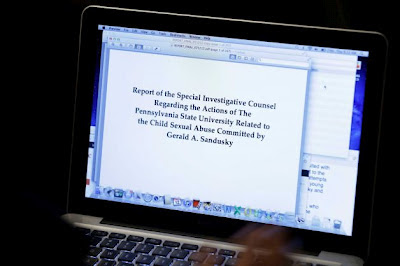 (Pix from Excerpts from the report on Penn State, Sandusky, Greenwich Time.com, July 13, 2012)

The Senate has heard President Erickson's call to duty, diligence and dedication in the conduct of everyone's obligations within the university.  It will, as the President urges, respond to public scrutiny by redoubling its efforts and rededicating itself to complying with the obligations that it has been given and which it members have undertaken.  With thanks to President Erickson we will do our part  as an important part of university governance, at least until that time may come when the Senate's role in governance--either formal or functional--is eliminated.

This post describes the initial Senate institutional response--on July 18, 2012, the Senate Council of the Penn State University Faculty Senate (Senate Council Roster) will meet to discuss first steps in considering the institutional faculty's response to the Freeh Group Report and its engagement in shared governance as the university moves forward with what may be significant changes in governance and governance culture at Penn State.

The Senate will join the administration and Board of trustees, each of which has constituted a group to review the Freeh Group Report recommendations to develop a set of proposals for governance changes at Penn State.  The Senate, will also act proactively, working with both in the development of ideas and approaches to change that includes the faculty perspective.  This is an important addition.
It has been troubling that for a report that sought to intervene constructively in changes to university governance, the Freeh Group managed to ignore faculty and seems oblivious to the importance of shared governance as the essence of the operation of a research 1 university.   In light of even recent expressions to the contrary by the president and Rector of the University of Virginia (Joint Statement  From the Rector and President of the University of Virginia), this is an important omission.

As first steps, we will work to strengthen the networks of communication and collaboration between each other, as well as among all of our stakeholder groups: students, faculty, and staff; members of the Board of Visitors; alumni, donors, and parents; and key external constituencies in the Commonwealth and beyond. We also commit to engaging the community in the creation of a plan of action that will sustain excellence for future generations. (Joint Statement  From the Rector and President of the University of Virginia),

This failure by the Freeh Group may color the way in which the Freeh Group recommendations are understood and transposed from suggestion to rule. But that remains to be seen.
The focus of the meeting includes consideration of six topics:

Email ThisBlogThis!Share to TwitterShare to FacebookShare to Pinterest
Labels: board of trustees, Freeh Report, institutional role of senate, shared governance