A few years ago I suggested that the Penn State Faculty Senate consider studying whether women faculty were effectively burdened with greater service requirements and the potential effects of this additional burden on advancement and career paths.  The idea was politely publicly received and privately mocked (ironically by older women in positions of power); it died undone. 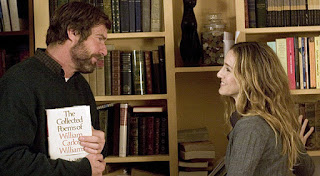 (Pix from Alexis Coe, "Being Married Helps Professors Get Ahead, but Only If They're Male," The Atlantic, Jan. 17, 2013)

I am happy to see that at least elsewhere academic research is beginning to suggest what I suspected--that women with academic appointments are effectively burdened with responsibilities, both in and outside the home, that disproportionately burdens their paths to career success and advancement. See Robert B. Townsend  "Gender and Success in Academia: More from the Historians' Career Paths Survey," Perspectives in History 51(1): (2013) (focus on marital status).

The report is described in Alexis Coe, "Being Married Helps Professors Get Ahead, but Only If They're Male," The Atlantic, Jan. 17, 2013.  Relevant portions of this article, focusing on the burdens of service, follow. I suspect that the distortions are greater when race and  ethnicity are also factored in. I can only hope that someone might take this up again at Penn State.


Alexis Coe, "Being Married Helps Professors Get Ahead, but Only If They're Male," The Atlantic, Jan. 17, 2013 (quoting in part Tara Nummedal, an associate professor of history at Brown University).

Robert B. Townsend, deputy director of the AHA, surveyed 2,240 associate and full professors of history and released the findings in this month's Perspectives on History. Female historians who were either married or had been married at the time of the 2010 survey took an average of 7.8 years to move from associate to full professor. Women who had never married were promoted in an average of 6.7 years. Almost two times as many of the female full professors listed their status as divorced or separated, which suggests their professional obligations were somehow less compatible with marriage than their male colleagues. They were also more likely than their male colleagues to have never wed at all.

Conversely, male historians who were or had been married advanced in 5.9 years. The unmarried man took 6.4 years, a bit longer.

Female professors were more likely to have a spouse or partner with a doctoral degree, 54.7 percent to men's 30.9 percent. Their partners were also more likely to work in academe, 49.6 percent to 36.3 percent.

What is considered "fair treatment?" It could very well refer to better class times, larger offices, time allotted for research, maternity leave, and higher salaries, but to the professors I spoke to, the meaning was clear: the burden of service.

In addition to teaching, research, and publishing responsibilities, service constitutes a major part of a professor's career. Academics may be asked to advise to undergraduate and graduate students, teacher assistants, academic senates, and to provide private tutorials or additional class sections for honors students. In addition, there are committees on diversity, hiring, professionalization, and admissions. Many of these professional obligations occur on a weekly basis, meaning that professors spend more time spent sitting in conference room than teaching in lecture halls.

The gender breakdown within a department plays a significant role. Typically, there are more men than women within a discipline, and yet committees seek as much diversity as possible. Women, then, are often asked to do double the amount of service as men, a number that increases for women of color. While service is certainly considered when promoting, publications play a much larger role. Service takes time away from research, so women will have a harder time keeping up with the publishing output of their male counterparts.

Nummedal sees women called to committee work far more than men, but offers another reason. "Men are better at protecting their time," she said, further observing that women do recognize that they are called upon more often, but are compelled by a sense of community, not just professional obligation.

"This is one of those places where the ability to say 'no' and pick where you should devote yourself to the university may have very different consequences," said Rockman, which is not to say that men are trying to avoid service entirely. Professors of both sexes do care a great deal about furthering an institutions goals and enriching the community, but men assert greater control over exactly how that happens.

The flexibility of academe is often misunderstood: Time is still of the essence. Domestic duties take women away from committee duties, and domestic and committee duties detract from time spent on research that results in a paper or book, all of which puts female historians further and further away full professorship.